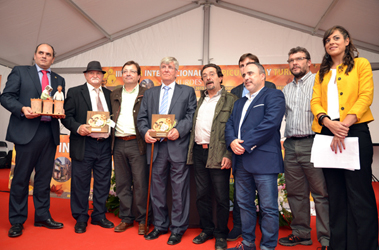 It has been a great honor to receive the prize of the regional authorities, as Ambassador of Las Hurdes, in the last Beekeeping and Tourism Fair of Caminomorisco, held in early November 2015.

But the recognition that it implies, materialized in the own delivery of the commemorative plaque by the president of the "Junta de Extremadura", Mr. Guillermo Fernández Vara, must be directed not only to me, but those that from the Administrations of the Region, the County Council and the Community, and the Mayor itself, they support us every day and help to bring our dreams, hopes and projects to good term.

I want to leave witness of my gratefulness  to all of them who have helped to make possible the Riomalo Rural Tourism Complex, and they still are doing every day. I think there are actions that go unnoticed for ordinary citizens and often we do not perceive that there is much work behind what we see, at the institutional level.

My warmest congratulations to the Municipal Corporation of Caminomorisco, with Gervasio Martin Gomez in the lead, because of the good one to do demonstrated in the mentioned fair. We can show Las Hurdes through our respective tourism companies, but they are those who promote the possibilities that are opened in order that Las Hurdes had a present and a future as I think the region is deserved.

And to all those who participated in the mentioned fair, my sincere thanks, on behalf of Riomalo Rural Tourism Center and in the name of all hurdanos of good that we work and try the region was known inside and outside our borders.