Natura 2000 is a European ecological network of the conservation of biodiversity. It includes  special areas of conservation (ZEC) established in accordance with the habitats directive and areas of special protection for birds (ZEPA) designated under Directive Birds.

It aims to ensure the long-term survival of the species and types of habitat in Europe, helping to halt the loss of biodiversity. It is the main instrument for nature conservation in the European Union.

For more information about Natura 2000 in Spain, we refer to the website of the Ministry of Agriculture, Food and Environment:

Las Hurdes, as a region, are within the Red Natura 2000, thanks to its biodiversity and habitats of various species of fauna and flora of special vulnerability. To download the data sheet of Las Hurdes, in relation to the Red Natura 2000, click on the appropriate link below. To download the Catalogue of Endangered Species of Extremadura (Decree 37/2001), click on the appropriate reference.

As it is expressed in the form of the Natura 2000 network for Las Hurdes, the region enjoys special protection for its biodiversity. We collect the description of the form:

"The area is located in the North of province of Cáceres, bordering the province of Salamanca. The main feature is the existence of nearby middle altitudes to 1.000 metres above sea level, from minimum altitudes of 386 metres in the southeast, where it reaches the valley Alagón, at the height of the tail of the Gabriel y Galán reservoir. The region has its highest altitud at the top of Rongiero, 1.624 meters above sea level. This space is located on the South side of the peaks of the Sierra de la Peña de Francia, with a series of mountains of less altitude as the Sierra del Horno, the Sierra de la Canchera or the Sierra del Cordón and the areas among them, such as the Corredor or the Collado de La Zambrana. With these features and its wide area (26,982 ha.), it’s found in this region a rich diversity of habitats: heathers in the summits, fruticedas, forests of oaks, chestnut trees, forests gallery, etc. Also it should be noted the existence of rocky outcrops because of the populations of birds that they harbor. The pines of repopulation take also a great importance because the surface they cover. In low-lying areas we find different crops that give a rich and tessellation landscape since the majority are small patches.

A total of 27 elements mentioned in the Directive are represented on the enclave. Of these, 10 are habitats and 17 correspond with taxa of Annex II. The region is an area of great interest because of its characteristics (altitude, geography, etc.). Within habitats it is remarkable the good representation of dry heaths (4030) with 2,625 has .; the Fruticedas and groves of Juniperus (J. oxicedrus) 866 has .; the Galician-Portuguese oak woods with Quercus robur and Quercus pyrenaica (9230) 207 has .; Genista purgans on the mountain (5120) 190 ha. and endemic Mediterranean heaths with gorse (4090) with 138 ha. Among the other areas are cork, chestnut, oak, willow, poplar, pine plantations, cultivation areas, etc. In the high and inaccessible zones there are cliffs used by various rock-dwelling species.

In the case of taxa, the region has a good representation of flora and fauna. Among these, we find two plants (Veronica micrantha and Festuca elegans), three invertebrates (Cerambyx pig, Lucanus cervus and Euphydryas aurinia), four species of fish, two reptiles (Lacerta schreiberi and Lacerta monticola) and five mammals (Lutra lutra, Galemys pyrenaicus, Capra pyrenaica pyrenaica and the possible presence of Lynx pardina and Canis lupus). Another detail to consider is the great value of the highland areas used by various species for breeding, as Aegypius monachus, Aquila chysaetos, Neophron percnopterus, Falco peregrinus, Gyps fulvus and Hieraaetus fasciatus".

ZEPA And LIC Areas and Singular Trees of Las Hurdes

The region itself is declared a Special Protection Area for Birds (ZEPA) and a Site of Community Interest (LIC).  Furthermore, and specifically, the rivers Alagón and Esperabán have the statement of Sites of Community Interest (LIC), as well as the Sierra del Risco Viejo, boundary of the region in the Southeast area, close the lands of Granadilla.

Another important issue is referred to the catalogue of Singular Trees of Las Hurdes. The region has several copies: The yew of Cerezal, the juniper of Las Mestas and the arbutus of Guijarroblanco.

We recommend to extend the information ithrough the page of the Government of Extremadura, whose link is: 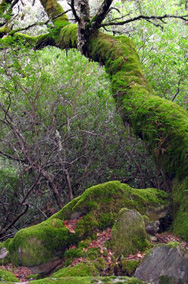 Not only the proverbial beauty of the natural surroundings of the known as the Volcano of El Gasco, but also the successive theories about what really is have increased the interest beyond the limits of the region .

After some studies, conducted by various experts , it showed that the volcano is consequence of the impact of a meteorite more than a million years ago.

The statement of Place of Scientific Interest took place in 2003 and protected an area of nearly 100 square meters. Its main feature is the crater that formed on impact, about 50 meters in diameter, as well as the presence of a mineral, ringwoodite,  whose name comes from the Australian geophysicist who discovered it in another meteorite.

Click on the link to download the information of the Junta de Extremadura on the Volcano of El Gasco, or the Decree of Declaration, both in pdf format. 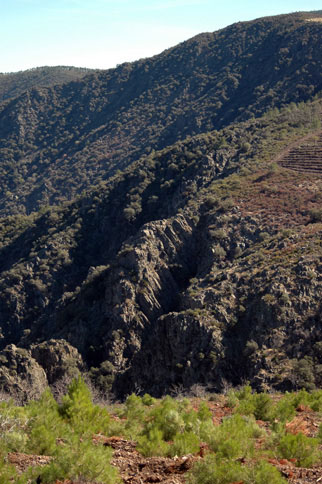 The change of mentality, at international and national levels, which occurred before the end of the last century did we took awareness of the need to preserve the natural environment to ensure the survival of the planet as we know it, and bequeath to future generations. Lack of awareness of citizens towards these issues has made that the international community has acceded to protocols protecting nature and that many countries have regulated the protection and conservation of the natural environment, with greater attention to those places which its flora and fauna must be specially protected.

Extremadura promulgated the Law 8/1998, of June 26, about Conservation of Nature and Natural Areas, declaring in the explanatory statements:

"The deterioration of nature is a verifiable fact in the diversity of attacks and serious changes, real or potential, which can be seen in the water, air, soils, land and living things.

Such a deterioration was an increasing process since the nature was happening to be an object of appropriation, turning into simple goods. Thus the development was understood as a sustained process of economic growth, at the cost of the nature and other human groups.

As the society is more conscious of the deterioration of the nature and the habitability of the planet it will be arising an increasing interest in its protection.

When still remains the solution to many problems of strict survival, discrimination or clear social injustice, an additional problem arises of unquestionable magnitude. It is caused by the knowledge of the progressive destruction of the nature and by the conditions of habitability and survival of the Planet. Assuming the urgent need to combat all forms of discrimination or unequal situation, it arises an obliged position of solidarity with nature and, above all, societies that inhabit it and that they have been the most disadvantaged and impoverished for several reasons".

And: "In this context of reflection and supranational, national and regional concerns about the environment, nature and human activities that affect it, the promulgation of a law turns out to be the opportune frame that recognizes the natural and cultural environmental values of Extremadura; a law in which Extremadura assumes the commitment of the conservation, improvement and restoration of the natural heritage; this law should be an active and supportive commitment to nature and people who live in Extremadura, for today and the future".

Furthermore, in 2009 Extremadura developed a strategy to stop the climate change, one of the most serious problems which the planet is facing, making a final document in 2013 with the guidelines and measures of analysis and monitoring. The report, Climate Change Strategy for 2013-2020 in Extremadura, includes the areas of control and the actions taken.

Click on the links to get the documents of the law, the modification of 2006 and the Climate Change Strategy, all in pdf and in Spanish language.

More than 25 years ago it began to gain importance hiking as a new type of physical activity in our country. Then it began the installation of the first signposted ways. The boom that this activity has taken in recent decades has promoted an alternative tourism, lover of the natural environment and with a special sensitivity to nature and conservation. So the activity itself has allowed the enhancement and dissemination of spaces that were previously barely known, only by people around.

Since Riomalo CTR want to promote the network of ways that cross Las Hurdes, as a way to explore the region and get to places of special beauty or significance, but we don’t forget that we must emphasize the need to protect the natural environment. Preserving our land is one way to help preserve the planet and the only way the next generations can enjoy its natural appearance as we have done.

Therefore, we remind some basic rules of environmental respect, as well as inform you of legislation and protection of spaces. By clicking in each section, you will have access to the different documents.

Basic rules for walking through Las Hurdes are:

• Do not make a fire, except in specifically allowed places and times without risk.

• Leave each place in the same way that upon arrival, that is, without a remainder or residue; your passage through the region only should be your footprint on the ways.

• Use the paths and not walk away from them, especially in sensitive to erosion places.

• Respect the property of the people of each place and leave the doors, fences, as we have found. Similarly, respect the shelters and cabins, since its conservation will depend on the use that we do, in order that others can use them.

• Dogs, as a rule, should not be loose to prevent  scare the cattle

• Do not spill anything on sources or streams.

• Respect the fauna and the flora.

• Do not chase with shouts to the other beings that inhabit

• Do not make free camping. The camp has to be done in

places prepared for it. 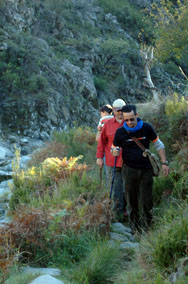